Fencing is an obscure-yet-popular Olympic sport, with a rich history that predates the modern Olympics, as it was first developed in detail in the 1700s. The 18th century’s version of fencing, so-called classical fencing, is slightly different from modern Olympic fencing, which leans on the French school more than the Italian school. But even if that’s all Greek to you, don’t worry. You can still get Olympic fencing betting odds for the 2021 Summer Olympics in Tokyo, and you don’t have to have a deep understanding of this aristocratic sport to win a nice chunk of change when some unlucky combatant gets a dagger up the strap.

Comprising the three distinct disciplines of the foil, the epee, and the sabre (singlestick was included in the 1904 Olympics but was abandoned in future Games), fencing is always a crowd favorite at the Summer Olympics, and not because it takes place inside an air-conditioned arena. While most spectators are generally unfamiliar with fencing, it remains a crowd-pleaser thanks to its pacing, tempo, and general glamor. Fencing is one of the oldest Olympic sports, and fencing competitions have been held in every modern Olympic Games (along with track, cycling, swimming, and gymnastics). From the Frenchman’s Wave to Bonetti’s Defense, fencing has permeated the popular consciousness of America in minor – but pervasive – ways.

As you might expect, Olympic fencing has historically been dominated by the originators of the sport – that is, the Italian and the French. With few exceptions, you can expect a series of Frenchman and Italians (and their female counterparts) at the top of the 2021 Olympics fencing odds board. If you pay attention to world rankings, you might be able to get an edge early on, as the International Fencing Federation (FIE) is the sport’s main governing body and keeps a list of the top-ranked fencers worldwide. As the fencing events begin winding down, the gold medal events are just ahead and they begin on July 27 with the men’s sabre team event. Following that, there is a fencing gold medal event every day until Saturday including the women’s foil team event, men’s epee team, women’s sabre team and the men’s foil team.

USA residents can and do bet on Olympic fencing, the lines for which are commonly available at overseas sportsbooks. While you might be able to find a few lines at your local brick-and-mortar or online sportsbook, the offshore sites have many more Olympic odds to choose from. This is primarily because fencing is a largely European and Asian discipline, with little mainstream following in the United States. Nevertheless, if there’s ever a time that American bettors are inordinately interested in swordplay, it’s during the Summer Olympics, and all the top offshore sportsbooks will have action on this storied and distinguished sport.

Right now, you cannot find any current fencing betting lines for the 2021 Tokyo Summer Olympics. However, as the lighting of the torch for the global sports festival approaches, more and more online betting sites – both domestic and international – will be posting fencing odds. Based on history and tradition, you can expect a host of French and Italian competitors to top the odds boards, but don’t be surprised to see other nations fare well, as Hungary, Russia, China, and others have really come on strong over the past few Olympic Games. Check back here to see updated odds and lines on all the fencing action in store for the 2021 Summer Olympics.

There is way too much nuance in the scoring system for Olympic fencing to discuss it all here, but the basics are simple enough. In fencing, two competitors face off on what’s called the “strip,” which is a section of marked floor 1.8m wide and 14m long (6ft x 46ft). Here, fencers will stand facing each other at the en-garde line (which is where the “en garde” or “on guard” phrase comes from), and they will commence to stabbing. Artfully, of course.

Depending on the kind of sword in use (foil, saber, epee), the techniques and target areas used in scoring points will differ. Nevertheless, each match is comprised of three 3-minute rounds with 1-minute breaks between each. Strikes are scored on aggregate throughout the rounds, with 15 hits – or 15 points – determining the winner. Individual Olympic fencing is single-elimination, whereas team fencing uses a relay system where fencers are rotated in every 5 hits until one team scores 45 points.

How Do I Bet On Olympics Fencing?

At arm’s length, of course! But seriously, betting on fencing is the same as wagering on any other individual or team-based event. Most of the wagers available will be of the futures variety, as live betting during a fencing match is probably not going to be readily available to American bettors. Essentially, for most kinds of fencing betting odds you’re likely to come across, you’ll just choose who you think will win the matchup or which fencers you think will take home the gold, silver, and bronze medals.

PROS:
CONS:
Bovada.lv
Get Off The Fence And Bet With $250 In Free Plays!

Bovada is the number-one sports betting site in the US, with millions of American customers calling the service home. One reason that Bovada’s such a hit nationwide, of course, is because fencing and other less common Olympic sports always manage to get top billing at the site. Bovada has an international clientele, and because of that, international sports that normally get no footing at US-based sportsbooks tend to be featured with more respect – and more lines – at Bovada.

Are you on the fence about joining an offshore sportsbook? Well, don’t be! Bovada is 100% safe and legal to use for most US residents, and signing up is as fast as an epee match. Best of all, it’s totally free, and new bettors who sign up to bet on Olympic fencing at Bovada can take advantage of the site’s unrivaled 50% deposit match bonus. This bonus will match your first deposit at the site for up to $250 in free-plays, and because the perk comes with the industry’s lowest rollover (just 5X), you’ll have added peace of mind whenever you place a wager on the Olympics’ most romantic event. 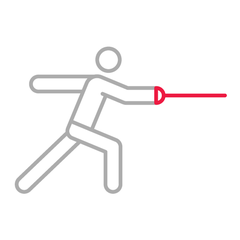