The Bobsleigh combines unique athleticism and speed to provide one of the more thrilling events at the Olympics. Since 1924, the Bobsleigh event has been a fan favorite with the two and four man teams speeding down the ice tracks at blistering speeds. Whether you are a passionate fan of the Bobsleigh or will be watching for the first time, betting on Olympic bobsledding events only makes the exciting sport more entertaining and we are here to break down the best wagers for the 2022 Beijing games.

The Beijing 2022 Winter Olympics Bobsleigh odds (or, as we call them, bobsled odds) will have familiar nations competing for medals in this year’s trio of Olympic Bobsleigh events. Over the last couple of Winter Olympics, the US, Canadian, and Russian teams have been the most dominant forces.

What Is The History Of Olympic Bobsledding?

The sport was invented in the late 1860’s by the Swiss when they attached two skeleton sleds together and added a way to steer (called a toboggan). Hotel manager Caspar Badrutt took the idea and marketed the activity as a part of the “winter resorting” season for his regular English tourists. The sport’s name derives from contestants bobbing back and forth to make the sled move faster.

Bobsled competitions began in 1884 in St. Moritz, Switzerland, starting with straight runs on snow-covered roads. The first bobsleigh club was founded in 1897 in St. Moritz, and the first track built specifically for the sport opened in 1902. Tracks eventually added twists and turns to increase the difficulty of competitions, and the original wooden sleighs were replaced by fiberglass and metal sleds. The sport was introduced at the inaugural Winter Olympic Games in 1924, appearing in every Winter Olympics since (excluding 1960 when organizers refused to build a track). Women’s Bobsleigh was introduced at the 19th Olympic Winter Games in Salt Lake City in 2002.

What Events Makeup Bobsleigh At The 2022 Beijing Olympic Games?

Three Bobsleigh events will take place at the 2022 Beijing Olympic games – Two-Man Bobsleigh, Four-Man Bobsleigh and Women’s Bobsleigh. For the most part, these events are identical, and they all run on the same course (which is typically installed especially for the Olympic Games). Sledders all have ample opportunity to test and learn the track’s unique running characteristics before their competition actually takes place (since there is no “standard” course shape or length).

Track lengths average between 1200 to 1300 meters, (1300-1422 yards), with an 8-15% slope and a 20-meter minimum curve radius. Since races are often decided by as little as one one-hundredth of a second, maintaining speed is the key element to winning the event. A sled has an average maximum speed of 136 kmph (85 mph), and most courses have between 14 and 22 curves to negotiate. Rankings are decided by the total time of the athletes’ four heats. 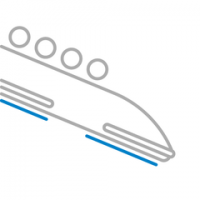 Americans To Medal in Olympic Bobsleigh