Football (or as Americans call it, soccer), is without a doubt the most popular sport in the world. That means that Olympic football betting odds for Tokyo 2021 will be heavily sought after from football lovers across the globe. Cheering for club teams and local football franchises pale in comparison to the sheer passion that comes from rooting for your country’s national team. And while not all the soccer stars of the world will be able to play in the Olympics, the next young wave of soccer giants will take center stage during the games and will surely provide fans and bettors with tons to look out for.

We’ll go over how the Olympic rules will affect the football matches that are played as well as discuss the rules for betting on them, particularly for USA residents. We’ll even help guide you as to where to find the best sportsbooks for the 2021 Tokyo Summer Olympic games and review our favorite. You can also find out some of the current odds and the football schedule so that you can be sure to have your bets ready in time. It’s not often that you get to see national teams compete for such a coveted prize such as the gold medal, so you can expect to see some fierce competition and quality football when you tune into the games.

Favorite To Win Olympic Gold In Football At Tokyo 2021

When it comes to the men’s side, there is usually no telling which team will win. The past three Olympic games have featured a different winner. Host country Brazil took the most recent gold medal in the 2016 Olympics, Mexico took the top prize in 2012, and Argentina came out on top in 2008. France most recently won the 2018 FIFA World cup so you can expect them to be heavy favorites coming in. Kylian Mbappe is one of the team’s best players, but he is under the age restrictions set by the Olympic Committee. If he’s cleared to play then expect heavy odds for France.

On the Women’s side, America holds the record for most gold medals. They have been able to win four of the six tournaments since woman’s football was introduced to the Olympic games. Germany took home the gold in the last Olympic games, but America is still the highest rated national team in the world according to FIFA rankings. Lookout for team USA when dsearching for the favorite to win in the Tokyo 2021 Summer games.

Can USA Residents Bet On Football?

Yes, and they can do so through a number of different ways. Depending on the state you live in, you could possibly visit your local sportsbook and lay down your wagers in person. You will have to be of age which can be either 18 or 21 depending on your state laws. You may also be able to use your state authorized mobile betting platform in order to place wagers on Olympic Football. This ability isn’t available in most states, but there is a way to legally bet on football no matter where you live in America. That method is through the use of online offshore sportsbooks. Because they operate overseas, they are not affected by either state or federal laws. Most of those laws also target domestic operators and not local users of offshore sites which is why so many Americans bet with them every day.

The current Olympic betting odds for the 2021 Tokyo football games have not yet been released. The reason being is that countries still have to go through certain qualifying rounds before they can be invited to compete in the games. Qualifications include the CONCACAF Olympic Qualifying Championship, Africa U-23 Cup of Nations, and the AFC U-23 Championship. Each continent will have to compete within itself before they can compete with countries of other continents. As soon as odds are released, you can be sure to find them at the sportsbook sites we’ve listed below.

The basic rules of Football in the 2021 Tokyo Olympics is the same as it is anywhere else. Two teams of 11 players each will compete on a 105m X 68m field. One player of each team will act as the goalkeeper and will be able to use their hands so long as they are in the penalty area (also known as the 18-yard box). The rest of the 10 players from each team are only allowed to use their legs, head, and shoulders to be able to put the ball in the opponent’s net. The only rule change that national teams will have to consider is that only those who are 23 and younger will be allowed to play in the Olympic games. Each national team is only allowed to bring three players that are older than 23 to play. This levels out the playing field and gives a chance for young players to step into the world spotlight.

Bovada is the type of sportsbooks that other online betting sites wish they could be. That’s because the sleek and elegant design of the site added with the overwhelming amount of wagering opportunities have many who use the site once coming back for more. This is especially true when it comes time to bet on the 2021 Tokyo Summer Olympic games. Bovada will surely have odds for almost every major event, especially for football. Bovada already offers football odds for international matches all year long and their betting lines for Olympic football games will surely be the highest sought after by American bettors.

Not only will Bovada accept almost any resident from the U.S., but they will also provide a mobile-friendly version of their platform to anyone who is trying to place wagers from their phone or tablet. It won’t matter if you’re using an Apple or Android device because the site doesn’t skip a beat and works flawlessly. Bovada also rewards first-time users of the site with a generous welcome bonus. You can earn 50% up to $250 dollars on top of your initial deposit, so be sure to check them out before the Olympic Games begin.

How Do I Bet On Football?

Betting on Football follows the same method as most sports in that you will find a moneyline, spread, and totals betting line to take. While all three of those involve aspects about the ending score of the game, you can also find wagers such as player prop bets which let you put action on an individual player’s performance. If you are trying to bet on football online you will need to sign up to an offshore sportsbook, deposit funds into your account, then use those funds to bet on whatever set of odds you like. Signing up follows a similar process to making any type of basic account online, and depending on what type of method you choose to deposit your funds, you may need to provide some form of ID. 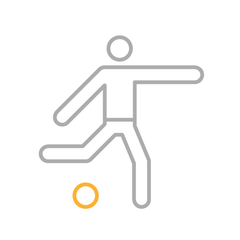