Between runs, athletes receive random weight checks and before each artificial track run, the sled with the athletes is weighed at the start ramp. Once an athlete is on their sled they are audibly notified that the track is clear. From that point, they have 30 seconds to start their run. A run becomes official when an athlete and their sled, in contact with one another, both cross the finish line. Sled checks are also performed after the final run of the competition. The three medalist then do what is called “sled control” where the entire sled is taken apart and officials check illegal methods or materials in the sleigh. Examiners perform measurements and check the suspension system to ensure there is no foul play.

Our highest-rated online sportsbooks are listing current 2018 Winter Olympics luge betting odds for PyeongChang according to each discipline. These betting lines include individual event futures odds, total medals won, over/under bets on the time of individual run and so on. Betting odds on Olympics luge competitions for men and women are currently available at the winter sports and Olympic betting sections of Bovada, Bet365, BetOnline and 5Dimes, where you can find all the details as soon as they’re updated. The odds on Olympics luge races are among the fastest to change following each event, so don’t miss out on this opportunity to cash out a huge winning ticket as soon as new betting lines pop up at our most recommended sportsbook sites.

The Olympic luge team relay odds are available at Bovada, though Bet365 is not currently listing odds for the men’s-only event, which features teams of several athletes contesting for the highest combined total score. Participating luge teams are judged based on the time it takes them to get to the bottom of the track, and with speeds approaching 88 miles per hour this even always draws a huge crowd and thousands of bettors at any one time.

This event turned out much as predicted with one major upset. Thanks, Canada. According to the Luge Team Relay medal results released earlier on Feb. 15, Germany’s team won the gold medal (as it was heavily predicted to do, based on its overwhelmingly favorable odds on the betting board at Bovada). Austria’s team, which had the second-best odds to win the event, actually finished third to nab the bronze medal. Canada, however, which was way back on the boards – and tied with the USA – shocked everyone in the crowd and the other competitors as well with a fantastic run into second place and a silver medal. That turn of events made bettors a metric ton if they took the long odds.

Germany continues to dominate the boards in Olympic luge doubles odds that have been released at Bovada. Indeed, all the top teams according the handicapping done by Bovada’s bookies hail from northern Europe, with the German team way out in front of all competitors. The US team, long as its odds may be, is actually middle of the pack in the overall standings.

Greater Germany is going to like the Olympic Luge Doubles medal results released this morning, as first and third spot on the podium featured racers from Deutschland, while the second place finishers were ethnic Germans from Austria. The dynamic duo of Tobias Wendl and Tobias Arlt proved good things come in twos as they sped across the line faster than their competitors to secure a gold medal, while their countrymen Toni Eggert and Sascha Benecken, who originally had moneyline odds of -200 (way ahead of everyone else on Bovada’s betting board) claimed bronze. The silver medalist in the Luge Doubles event was Peter Penz and Georg Fischler of Austria, who were quite a ways behind Wendl and Arlt in terms of odds going into the race.

After the excitement of the team and doubles competition, it’s now down to just one man and his sled. The Olympic luge men’s singles odds again favor Germany over everybody else in the world, but the Russians are back in the mix, as are the fellows from Austria. However, we could be looking at a clean sweep for the Germans with this many high up in on the boards at Bovada and Bet365.

The Olympic luge men’s singles medal results were about as far off the predictions for this harrowing event as possible, given that the favorite – two-time gold medalist Felix Loch of Germany – failed to make the podium at all. In fact, only one of the top athletes on the betting boards at Bovada or Bet365 managed to medal this year at PyeongChang, and that was Germany’s Johannes Ludwig, who, though having odds way back at +2500, won bronze after Loch had an abysmal final run. Austria’s David Gleirscher (who never won so much as a World Cup race) came out of nowhere to win gold, as did Team USA’s Chris Mazdzer, who nabbed silver despite never finishing better than 13th at the last two editions of the Winter Games.

Not to be outdone by their countrymen, the German women are looking especially good in this event. Only the USA and Canada appear to be in a position to challenge the Germans in the Olympic luge women’s singles odds available at Bovada and Bet365. That being said, the non-Euro ladies are largely going to be fighting just to make it onto the podium, as the Germans appear to have things fairly well locked down in this exciting downhill race.

Germany’s Natalie Geisenberger proved she deserved her spot on top of the Bovada and Bet365 betting boards with a runaway win according to the Olympic Luge Women’s Singles medal results released today. Her countrywoman Dajana Eitberger earned a silver medal, proving this was truly Deutschland’s event…until Alex Gough spoiled the party by taking the bronze medal for Canada. Gough had to come from fifth place on the boards, so anyone who bet on this Canadienne had a pretty darn good payday after last night’s races. Look for these ladies to try and hold on to their winning ways (or to get onto the podium) in the mixed team events coming soon at PyeongChang 2018.

Luge is divided into four disciplines – men’s singles and women’s singles events, as well as doubles and team relay events which allow mixed male and female competitors. These sub-events are each subject to very strict rules that govern seemingly every aspect of the sport from the weight of the riders to the physical measurements of the sleds, including the temperature of the individual blades before they hit the ice!

Our highest-rated online sportsbooks will list Olympic luge betting odds for PyeongChang 2018 according to each discipline, and these betting lines will likely include futures odds, total medals won, over/under bets on the time of individual run and so on. Betting odds Olympic luge aren’t available yet, so be sure to check back at the winter sports and Olympic betting sections of Bovada, Bet365, BetOnline and 5Dimes for all the details as soon as updates become available.

Germany is the king of Luge, proving as much by sweeping the events at the last Olympics. The Germans brought home gold in all three disciplines and added the silver medal in women’s singles. With 31 total medals to their credit, the county has nearly double the number of medals as the next closest country, Italy with 17, excluding East Germany who has 29.

Felix Loch is the youngest Olympic Gold Medalist in men’s luge history and is still in his prime at 27. Loch won the men’s singles event in both the 2010 and 2014 Olympics. He also won gold in the mixed team event in 2014. Loch is on pace to become one of the greatest lugers of all time and PyeongChang may well be another footnote in his story.

Can American Players Legally Wager On The 2018 PyeongChang Luge Events?

Fans have been placing wagers on the Olympics since the inception of the event. There will be no difference for PyeongChang 2018. However, finding a legal bookie to take your bet in the US might require a drive to Vegas. For those who would rather do it from the couch, online sportsbooks based offshore provide a rewarding and safe alternative for Olympic betting odds. Of these potential sports betting sites, Bovada, BetOnline, SportsBetting, and 5Dimes are the best places to wager on the 2018 PyeongChang luge events. 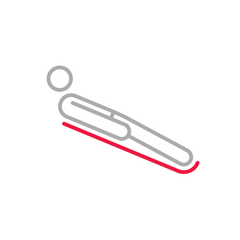