Olympic ice hockey betting odds for Beijing 2022 will probably see the most U.S. action out of any other sports at the games. Unlike the 2018 Pyeongchang Olympics, the NHL plans to pause the 2021-22 NHL season to allow the star athletes to compete in the Olympics, improving the quality of play and making the games more entertaining and intriguing.

Gathering all of the information you can about the nations and the competitors will help inform your decision and give you the best chance to win. We will bridge that gap on this page. Readers will find information on the rules that differ between the NHL and the Olympics, the favorites for the tournament, and safe places to make a bet on the

When looking to bet on hockey at the Winter Olympics, you can legally do so in the United States when using online betting sites such as Bovada, BetOnline, and MyBookie. Those online sportsbooks offer the best hockey odds all year round and when the Winter Olympics come around, there is no shortage of betting lines all around the country. You will not only find betting lines on different games, but also futures odds on who is going to win the gold medal in both men’s and women’s hockey.

What Is The History Of Olympic Ice Hockey?

Men’s ice hockey was first brought to the Olympics in 1920 as a part of the summer games. It was later transferred to the Winter Olympic Games in 1924. The early stages of the event saw Canada win four consecutive gold medals and 20 straight matches before losing to Great Britain in 1936. The Soviet Union was the next international force winning seven of eight gold medals spanning from 1964 to 1992. Their lone loss was the famed “Miracle on Ice” in 1980 when Team USA beat them for the gold. It wasn’t until 1998 before women’s teams were allowed to compete.

What Are The Rules For Olympic Ice Hockey?

The rules to NHL hockey are mostly understood by sports fans but there are several Olympic Ice Hockey rules that differ fr om those of the NHL.

The neutral zone is 58 feet long, making it eight feet longer than NHL rinks. The attacking zone is six feet shorter than that of the NHL, there is an additional foot between the end boards and the goal line and the ice is 15 feet wider. The 200-foot length of the rink, however, is the same as the NHL.

There are no restricted areas for goalies, meaning they can play the puck fr om anywhere on the ice. NHL players are given a two-minute penalty for using their hands to win draws. In the Olympics, the play will be whistled dead, but no penalty is given out.

The NHL has used the hybrid icing format since 2013, but the Olympics use the no-touch icing system. Icing will be called as soon as the puck crosses the opposing goal line. The Player’s positioning on the ice will not matter.

Penalty shots are also different. In the NHL, if a penalty shot is awarded, only the person who drew the penalty can shoot unless he is injured. In the Olympics, anyone on the floor during the penalty can be chosen by the head coach.

Fighting is not allowed in the Olympics, it is accompanied by a major penalty (five minutes) and game misconduct.

If a player’s helmet comes off, the player must come off of the ice immediately. Players are allowed to finish their shift if they lose a helmet in the NHL. 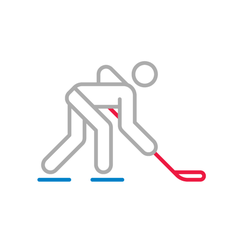 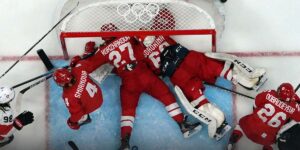 Denmark is a 2.5-goal underdog and has +425 odds against the Russian Olympic Committee in Men’s Ice Hockey. The game ending in a tie has shorter odds on the three-way moneyline than Denmark winning outright. Denmark pulled the upset against the Czech Republic in the preliminary round, winning their first-ever Olympic ice hockey game. BEIJING … Read more 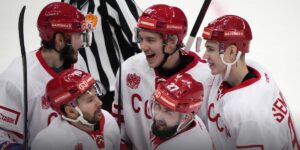 The Russian Olympic Committee has +150 odds to win the gold medal. Finland (+400) and Sweden (+450) have the next shortest odds. Canada (+600) and the USA (+1000) saw their odds fall. BEIJING – The Olympic hockey odds have undergone some serious changes over the last month due to the changing rules of the tournament. … Read more 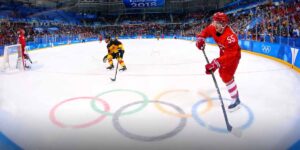 Canada was favored to win the Olympic hockey gold medal with +150 odds. It is unclear which hockey players and leagues will participate in Beijing. BEIJING – Following the announcement that the NHL and NHL Players Association have pulled all players from representing their countries in the 2022 Winter Olympics, sportsbooks have pulled all Olympic … Read more 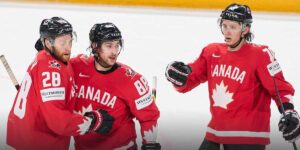 Canada has +150 odds as the betting favorites to win the gold medal in the upcoming Olympics. The Russian Olympic Committee has +350 odds as the second option on the odds boards. Sweden (+650) and the United States (+650) are the only other countries with odds short of +1000 BEIJING – The Olympics are closer … Read more