Curling betting odds for the 2022 Beijing Winter Olympics are available at all online sportsbooks. You can bet on which country will take home the gold in Beijing and many prop bets surrounding Olympic curling as well. Canada is favored to win the men’s gold medal while Sweden is favored to win the women’s contest. Although the USA won the last gold medal for the men, Canada won the three prior. As for Sweden, they won Silver and Bronze in the last two Winter Olympics. On the women’s side, Sweden has won three of the last four gold medals and a silver medal.

Curling betting odds for the 2022 Beijing Winter Olympics are available at all online sportsbooks. You can bet on which country will take home the gold in Beijing and many prop bets surrounding Olympic curling as well. Canada has won the event many times over the last few Olympics but Sweden - who hasn't had as much recent success - is also a top contender.What Events Makeup Curling at the 2018 PyeongChang Olympic Games?

What Events Makeup Curling at the 2022 Beijing Olympic Games?

While the curling consisted of only two events in the past, we will see a third at Beijing 2022 after its debut in 2018. With curling overall making its debut at the Nagano 1998 Olympic Winter Games, the sport is still growing with rules changing.

After its inaugural launch at Beijing 2022, the mixed doubled curling event sets teams of one male and one female player. Before a game begins, teams will be given 22 minutes to strategize. Each individual game is scheduled for 8 ends, with teams delivering 5 stones per end. Two stones are to be placed at the playing end of the curling sheet before the start of an end.

What Are The Rules For Olympic Curling?

The men’s and women’s teams, which each consist of four players and an alternate, play the game on a large sheet that measures about 150 feet long by 15 feet wide. On the ice pebbled sheet, you will find targets that the teams will aim to throw their stone into. Typically, stones are thrown in the order of lead, second, third (also called vice skip), and skip. Brushes or brooms can be used to guide the stone to its target. One game has 10 rounds where each player ends up throwing the stone eight times, and this typically lasts for 2 hours and 40 minutes.

In the new mixed doubles event, there will be two-player teams with 8 total ends. In both instances, the players must take turns moving the stones and aim to get theirs closest to the center of their house. Each house consists of four concentric circles. Points are delivered to the team with their stone closest to the center of the target at the conclusion of an end.

Can American Players Legally Wager on the 2022 Beijing Curling Event?

USA residents can wager on Olympic curling odds without having to worry about travel or legalities. With states regulating gambling in recent years, there are over 30 districts to bet on the Olympics. However, betting online is always easier and you'll want to use a site that is licensed, has a trustworthy name in the industry, and provides extra features such as mobile betting. Top sportsbooks such as Bovada and BetOnline take wagers from bettors all over the country. 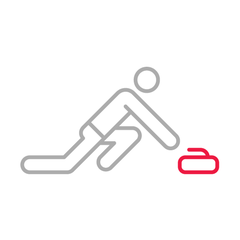 Americans To Medal in Olympic Curling 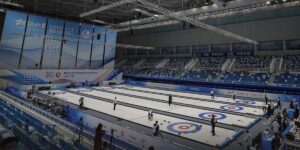 Canada has +200 odds to win the men’s curling event. Sweden has +300 odds on the women’s side as the betting favorites. The trio of Canada, Sweden and Great Britain have the shortest odds on both sides. BEIJING – The Winter Olympics are just a few weeks away from starting and one of the best … Read more