Olympic Ski Jumping is an impressive feat of athletic ability. Watching people launch themselves into the air faster than a speeding car on the interstate and then holding themselves in position while flying through the air is incredible. Betting on which athletes will be able to do it better than others just adds a little more excitement to an already thrilling sport. This page will have everything you need to know about the Olympic Ski Jumping betting odds for Pyeongchang 2018, including a description of the events and favorites to win the upcoming Winter Olympics.

Bovada.lv is currently listing betting lines on the Olympics large hill ski jump teams competition, and – no surprise here – Norway, the originator of the sport, is coming out on top in advance of the start of PyeongChang 2018 with favorable odds to win it all. Poland is pretty close behind Norway on the betting board from this early vantage point, though Germany can’t be counted out of the running either. These three teams are historically some of the best in the business, so look for them to be vying for gold in the Olympics ski jumping contest. In the women’s normal hill competition, Maren Lundby continues Norway’s dominant streak on the Olympics ski jumping betting boards, considerably better than those of her nearest competitor, Germany’s Katharina Althaus, or Japan’s Sara Takanashi. The Japanese don’t have as much collective momentum in the normal hill ski Olympic ski jump event though, as proven by the unlucky Yuka Seto.

The men’s Olympic Normal Hill ski jump may not be quite as death-defying as the longer 180-meter hill, but it still takes plenty of guts to fly hundreds of feet through the air, trusting to your form to stick a landing from higher than a several-story building. The men’s Olympic normal hill individual betting odds available at Bovada and Bet365 favor the Poles, but Germany’s and Norway’s best ski jumpers right there too, so this could be a pretty interesting competition for fans and bettors alike.

Germany’s Andreas Wellinger came out on top according to the men’s Olympic Normal Hill Individual medal results, winning the gold medal by besting Poland’s Kamil Stoch and a raft of top-flight competitors. Norway’s Johann Andre Forgan finished with a silver medal over his countryman Daniel-Andre Tande, who had better initial odds at Bovada and Bet365, as did bronze medalist Robert Johansson. With this event on the books, it remains to be seen if Stoch can live up to the expectations placed on him by the leading legal sportsbooks, as well as those of the fans and Winter Olympics analysts alike.

The Olympic women’s normal hill ski jump is an individual event in which participants slide down a somewhat shorter but still massive 90-meter ramp before hurtling through space for possibly hundreds of meters more. All in all, it looks like the Norwegian woman will be coming out on top in terms of grabbing gold medals in this PyeongChang 2018 event, but the ski jumping betting odds also look pretty decent for Germany and Japan as well, giving several nations’ competitors a solid chance of hitting the target – both at the end of their ski jump as well as for the top of the podium.

Norwegian ace Maren Lundby lived up to Bovada’s and Bet365’s high expectations for her by easily claiming the gold medal according to the Olympic Women’s Normal Hill Individual Ski Jumping medal results. Katharina Althaus, of Germany overcame several tough competitors to claim silver in the event. Among those rivals was Japan’s Sara Takanashi, who had higher initial odds than Althaus but who nevertheless finished the event with a bronze medal to round out the podium.

The story in the men’s large hill individual event looks much the same as in the normal hill, with the exception of a greater presence from among the Norwegian athletes in the longer ski jump. This discipline truly take discipline – and nerves of steel – as jumpers will hurtle through the air at frightening heights and speeds, setting world records in the process. Sharp bettors will pay close attention to any shift in the men’s Olympic Large Hill individual betting odds.

The bookies at the industry’s leading legal Olympics betting sites wouldn’t have gotten to be in the position they’re in if they couldn’t accurately handicap major sporting events with a high degree of accuracy, and Winter Games event don’t get much more prominent than the Men’s Olympic Large Hill Individual competition. The medal results are in, and – not to the surprise of anyone betting on this high-flying showdown – Poland’s Kamil Stoch came away with gold, but it was quite the effort to do so, as the Pole was trailed closely by his old rival, Andreas Wellinger of Germany. Only the bronze-medal-winning performance of Robert Johansson of Norway came as a marginal shock, as the Norwegian ski jumper did not feature prominently on the betting boards at either the Latvia-based Olympics sportsbook Bovada or the UK-based betting shop Bet365.

The Alpensia Ski Jumping Center is the host venue for this high-flying event that always goes over (way over) with winter sports fans. At PyeongChang 2018, the men’s Olympic large hill team betting odds definitely favor Norway – but that makes sense as the Scandinavian nation practically invented this along with many other Alpine events at the Winter Games. Participants can be expected to go for the gold medal by soaring off the end of the 120-meter ski jump, propelling themselves up to 250 meters through the air – and sometimes beyond that mark.

Sometimes the results of various sports at the Winter Games are exactly what they’re expected to be with little fanfare, and in the case of the Men’s Olympic Large Hill Team medal results that is exactly what happened. Norway, ever a leader in this high-flying Winter Olympics sport the Scandinavian nation pioneered and perfected, claimed the gold medal over its rivals from Europe and Asia. The Silver medal was then up for grabs between longtime and bitter rivals Poland and Germany, and despite the fact that the men’s team from Poland had the upper hand on the online Olympics betting boards at Bovada and Bet365, it was the Germany men’s team that claimed second place after a heated competition. Poland came away with a bronze medal after all, but you can bet the Poles will come thundering back to even up the score next time.

Olympic ski jumping is split into two categories, the men’s and the women’s divisions. In the men’s division, Olympic ski jumping involves three different disciplines. The first is the K90 Individual or the “normal hill” jump. The track itself, which is measured from the starting point to the “K” point (stopping point), can range anywhere from 75 meters to 99 meters, while the hill must be between 85 meters and 109 meters. For the PyeongChang games, the normal hill distance at the Alpensia Ski Jumping Center is 98 meters.

This discipline is followed by the K120 Individual and the K120 Team. The K120 individual is more commonly referred to as the “large hill” jump. This involves a track that has at least a 100-meter distance from the starting point to the “K” point. The hill itself must be at least 110 meters. In PyeongChang, the large hill ski jumping discipline will be conducted on a 140-meter hill. The K120 Team discipline differs from the K120 Individual only in that it is run with a team representing a country, rather than an individual. The jumping parameters remain the same.
While the men’s events have been around since the Winter Olympics’ inception, the women’s events are a much more recent addition to the Olympic docket. In fact, female-specific ski jump events have only been an official Olympic Sport since the Sochi games in 2014. There is only one discipline in the women’s Ski Jumping discipline, the K90 Individual. It is run at the same parameters as the men’s K90, with the PyeongChang track set at 98 meters on a 108-meter hill.

While the men’s events have been around since the Winter Olympics’ inception, the women’s events are a much more recent addition to the Olympic docket. In fact, female-specific ski jump events have only been an official Olympic Sport since the Sochi games in 2014. There is only one discipline in the women’s Ski Jumping discipline, the K90 Individual. It is run at the same parameters as the men’s K90, with the PyeongChang track set at 98 meters on a 108-meter hill.

What Are The Rules For Olympic Ski Jumping?

In the Olympic ski jump, skiers are launched off a ramp after reaching speeds that average about 75 miles per hour. At the end of the ramp, athletes are shot into the air, where the skier must keep their skis in a v-shape until they touch down farther down the slope toward the base of the jump. Skiers are then judged based on the distance traveled, their form while in the air and they do sticking the landing. The panel of five line judges then assigns the athletes scores based on an average of the best performance with regard to form with the low marks deducted. These “flying” scores are then added to the distance scores to determine the rankings of each competitor.

Who Are The Favorites In Ski Jumping For The 2018 Pyeongchang Winter Olympic Games?

In the Men’s division, the favorites this year are Norway, Austria, and Finland. These countries always have the favored athletes due to their proximity to some of the best skiing destinations in the world. Germany has a history of success in the team competitions as well. In the women’s division, odds are on the German and French competitors. Austria’s athletes are also expected to do well in the 2018 Pyeongchang games.

Yes, American players can legally wager on the 2018 games, so long as they use an online sportsbook located overseas. Sites like Bovada and BetOnline are the best online books for American players because they have the most up to date Olympic betting odds and the best payout track record. They also offer some of the best bonuses for their players. 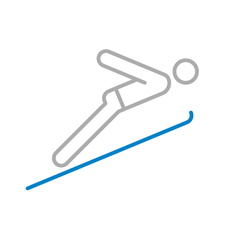