Alpine Skiing is an incredible display of athleticism and agility with the skiers navigating their way downhill at top speeds. These events have been a crowd favorite since their debut in 1936. Skiing fans might remember Lindsey Vonn or Bode Miller from the previous generation but a group of talented young Alpine Skiers are ready to take the slopes in 2022. One of the best ways to make a good sport more entertaining and desirable to watch is by placing a few wagers on it from the Super G to the Giant Slalom or any of the competitions. This page will help you do just that, giving you the Olympic alpine skiing betting odds for Beijing 2022.

The Games will take place in February of 2022, with the Alpine Skiing events spread out over the course of the 17-day Olympics. Many Americans won’t be able to travel to Beijing, located in China, but they’ll still be able to bet on the Olympics using an online sportsbook. This page will cover everything you need to know about wagering on Alpine Skiing.

Alpine skiing at the Winter Olympics contain some of the most popular events. For men, it includes the Super-G and Giant Slalom while women also have a Giant Slalom and the women’s Slalom. For them men’s Super-G, Austria was the most recent winner, but Norway won the four prior. In the Women’s Slalom, Sweden has won two of the last four including 2018 with the United States and Germany also in the mix. All of the Winter Olympic alpine skiing odds can be found right here.

What Events Make Up Alpine Skiing At The 2022 Beijing Olympic Games?

Alpine Skiing is composed of 6 total events. These disciplines can be broken up into two categories: Speed or Skill. The two events which fall under the category of speed are the Downhill and the Super G. The Skill events are the Slalom and the Giant Slalom. The Alpine Combined, as you can probably guess, combines speed and skill in a race that is a hybrid of the downhill and the slalom. Both Men and Women compete in each event in Alpine Skiing. 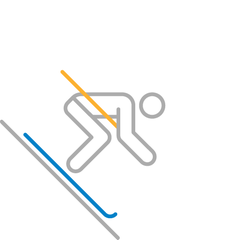 What Are The Rules For Olympic Alpine Skiing?

The Super G, also known as the Super Giant Slalom, involves skiers racing down a slope while making long turns around poles. To distinguish this race from the Giant Slalom race, the slope is steeper and the poles are set further apart from each other, at a minimum of at least 25 meters. The men have 35 poles installed, while the women only have 30. Any Olympic Super G skier who misses one of the posts will have a time penalty added to the total duration of their run. As with Downhill skiing, Olympic Super G competitors get only a single opportunity to post their best time.

As a skill discipline, the Olympic Slalom rules are also pretty easily understood once broken down. Competitors must race between poles, also known as gates, which are set at distances as small as 75 cm apart to as large as 15 meters apart. There is any number of gates in a given race. Generally, they range between 45-60 gates for women and 55-75 gates for men. Unlike the speed events, Olympic Slalom racers actually get run the course twice. The top 30 competitors from the first run move on to the second run to determine the outright winners. (Those returning 30 skiers must race in reverse time order, meaning the competitor with the 30th highest score from the first run is now the 1st skier in the second run.)

The Giant Slalom is similar to the standard variety, as it’s really just the slalom on a larger scale. There are thirty or more gates installed in any given race, and they are set more widely apart to compensate for the longer track. The scoring setup is identical to the smaller Slalom event, and the Olympic Giant Slalom rules similarly allow each athlete two total runs.

The Combined event has both a downhill race and a slalom race, each of which is timed. Per Alpine Combined Event rules, the Downhill race is run first, followed by the slalom portion. In the Combined, the slalom is only run once. The times of each portion of the race are combined, and winners are determined by the best combined run time.

The Alpine National Team event – a team-based twist of the Alpine Combined tradition – is new to Olympic skiing as of 2018 Pyeongchang. Each team consists of four athletes: two men and two women. 16 teams will compete in an elimination-style tournament to determine a winner, with one country’s representative racing another country’s head-to-head along a parallel course. Alpine National Team Event rules then determine a winner based on aggregate score, with the victor in each race earning one point for their country. (In the event that both racers fall, whoever was farther along the course wins a point for his or her team.)

To put it simply, yes, American players can legally wager on any event in the 2022 Beijing games. There are actually a couple of different ways to do this, only one of which allows you to remain in the comfort of your own home. The easier option is to use an online sportsbook as all 50 states can participate in Olympic betting odds this way. Over 30 states have approved regulated sportsbooks but different restrictions from not allowing Olympic betting odds or location restrictions can cause issues for some. Online Olympic sportsbooks offer an easy, safe, and most importantly, legal option for American players looking to bet on the 2022 Winter Olympics or the alpine skiing odds. 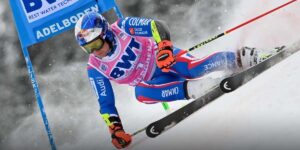 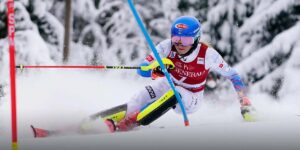 Mikaela Shiffrin Skiing Odds Have Her Competing To 3 Peat