For most modern spectators and bettors, the so-called modern pentathlon is the most absurd collection of sports ever to be lumped together as a single event. The modern pentathlon includes a series of divergent disciplines that have seemingly no fundamental relationship to one another. The five disciplines comprising the modern pentathlon are pistol shooting, epee fencing (one-touch), freestyle swimming (200m), show jumping (15 jumps), and cross-country running (3200m). However, “modern” isn’t the only misnomer, as epee fencing and show jumping are decidedly archaic, but so too is the “pentathlon” bit. The Olympic iteration as on display in the 2021 Tokyo Summer Games is actually comprised of only four events. Pistol shooting has been folded into cross-country running, making it effectively a single discipline. Despite – or perhaps due specifically to – the modern pentathlon’s ridiculous, kooky nature, it’s regularly a top draw at the Olympics, and for many bettors in the US, the spectacle of it is a definite attraction on the odds boards.

Who Will Compete In The Modern Pentathlon In The 2021 Summer Olympics?

Can US Residents Bet On The Modern Pentathlon In The Olympics?

The current modern pentathlon betting odds for the 2021 Tokyo Summer Olympics have many eastern and western European nations representing. Historically, in the earliest iterations of the sport, Sweden commanded healthy ownership of all aspects. Remember, the modern pentathlon was alleged to have been created by emulating Swedish military tactics and training practices. However, other countries have found success at the event, with Hungary, Russia, and Poland producing champions and medalists most recently.

What Are The Rules Of The Modern Pentathlon?

Given that there are five different disciplines in the modern pentathlon event, the rules are fairly in-depth. However, at the most basic level, they’re easy enough to understand. The first three disciplines are based on a points system which determines the starting order for the final two disciplines. From there, it’s a proper race to the finish line. Here are the basic rules for all five parts of the modern pentathlon:

There’s really no trick to betting on the modern pentathlon. The process is as straightforward as most other sports, despite the odd nature of the modern pentathlon. To get an edge, you’ll need to do two basic things. First, you’ll want to pay attention to the UIPM rankings going into the Olympics, cross-referencing how various athletes making the Games performed at major world tournaments beforehand. After that, the only other way to get a real edge when betting is to shop lines between sportsbooks. If one book has a favorite with +200 odds while another has that same athlete at +400 odds, you’ll want to place your bet at the latter venue. Aside from that, there’s really not much more to betting on the modern pentathlon at the 2021 Tokyo Olympics. 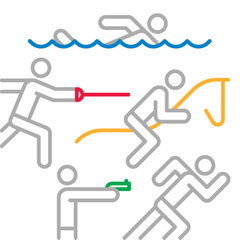 PROS:
CONS:
Bovada.lv
Take A Stab At Modern Pentathlon Betting With A $250 Bonus!

Bovada is the top US sportsbook, serving residents of 46 states. That means that unless you live in Delaware, Maryland, New Jersey, or Nevada, you can use Bovada to get all the Olympic betting odds you crave – including lines on the bizarre and exceptional modern pentathlon. You’ll be able to place straight bets on modern pentathlon action at Bovada, and you may even get a selection of props or individual disciple lines, too. With five distinct disciplines making up the modern pentathlon, there are a ton of variables when it comes to picking a winner, and top books like Bovada will break down the action into as many different wagers as possible.

If you want to wager on the modern pentathlon at the 2021 Tokyo Summer Olympic Games, you can do so quickly and easily at Bovada. The site accepts credit and debit deposits and takes Bitcoin (and other cryptocurrencies) for your convenience. If you sign up now, you can even get the industry’s best bonus, a $250 deposit match that comes with the lowest rollover anywhere (5X). Signing up is fast and free at Bovada, and it is 100% legal to use this offshore book for all your 2021 Tokyo Olympics betting. So get on your horse, take a shot, and skewer those odds at Bovada!