Short Track Speed Skating is one of the more intriguing events at the Olympics to place bets with the sport consisting of quick bursts and quick results. Since joining the Olympics in 1992, the short track Speed Skating events have brought fans from across the world to watch the exciting races. To make the events even more interesting, fans are preparing to bet on the races whether they are the 500 meter individual or the 5000 meter relay races. American fans will remember Apolo Anton Ahno dominating the sport in the previous decade and a new generation of young skaters is hoping to continue the success that Ohno brought to the ice. With the right wager, short track Speed Skating can not only be fun to watch but provide a profit in the process.

Americans can legally wager on short-track speed skating events during the Beijing 2022 Olympic Games. Though the odds for said events are not yet posted, we have still provided the best available sportsbooks below so players can take their time to choose which site they like the most. This is a good chance to get an early jump on your 2022 Winter Olympics betting knowledge and study up to prepare for the wagers you may place when that time comes. 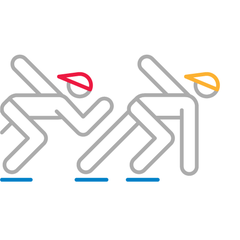 What Are The Rules For Olympic Short Track Speed Skating?

The shorter races, like the 500m, and the 1,000m, feature four participants, while the longer races like the 1,500m allow up to eight participants with what’s called a “Mass Start”. A mass start is just as it sounds, all athletes start at the same time and race not against the clock, but against each other. The winner is whichever athlete crosses the finish line first and only two or three participants from each race can go on to the next round.

Things that are against the rules are pushing, skating off track, impeding assistance, kicking, missing equipment, and false starts (two false starts, and you are disqualified).