Olympic Cross Country skiing is one of the best Winter Olympic sports to bet on and has been one of the more popular Olympic sports since its debut in 1924. With many individual and team disciplines that make up this event, Cross Country Skiing provides myriad opportunities for avid bettors from a quick wager on a 15Km to the 40Km team relay and everything in between. This page is here to help you understand the disciplines that make up the sport, as well as provide the most up-to-date and current Olympic Cross Country Skiing betting odds for Beijing 2022.

What Events Make Up Cross Country Skiing At the Beijing 2022 Olympic Games?

Cross Country Skiing is made up of 6 disciplines, and both men and women compete in each. The events can either be run in the classic style, or the skate skiing technique, also known as the freestyle technique. Cross Country tracks are broken into three equal segments of uphill courses, even courses, and downhill courses.

Of the six disciplines within Olympic Cross Country Skiing, there are four individual events. The first is actually called the Individual. In this part of the competition, the women representing their countries will run a 10Km race, using the freestyle technique. Men run this event for 15Km and do it in either the classic or freestyle technique. Next is the Sprint. This is a short-distance race where the women run 0.8 to 1.6km, and men run 1 to 1.8km. The Sprint can be run in either the classical or freestyle technique. Both of these races dictate that athletes have a 30-second interval between start times.

The next two individual events are the Skiathlon and the Mass Start. In the Skiathlon event, all competitors start at the same time. Women run a 15Km race. Men run a 30Km race. The first half of this discipline is run in the classic technique while the second half is run in the freestyle technique. The two different techniques require different equipment, which requires a change in the middle of the race. This equipment change is timed. Mass Start is another competition in which all of the athletes begin together. In this event, women use the freestyle technique and run 30Km. Men use the classic or freestyle technique to run 50Km.

There are two team disciplines in Cross Country Skiing. First is the Team Sprint. This is a short-distance relay race. Two athletes per team compete, alternating through 3 to 6 sectors. The women cover .8 to 1.6Km, and men cover 1 to 1.8Km. The final event is the Relay. In the competition, each team has 4 athletes. The first two run the classic technique, while the last two go in the freestyle technique. The women’s team runs a total of 20Km, while the men’s team runs a total of 40Km.

What Are The Rules For Olympic Cross Country Skiing?

There are quite a few rules that govern the sport of Cross Country Skiing. The most important for spectators to know are the skating techniques employed and how race positions are determined. First, these events are run in two different techniques. The Classical style of skiing is a simple glide in preset parallel tracks. The Skate Skiing technique, or the freestyle technique, is a skating stride where athletes push off on the inside of their skis, across a broader, flat track. This technique has no preset grooves to stick to. The Freestyle technique is much faster than the Classical technique. Because of this, each style is run in alternating games.

Determining the skate order is done through a drawing, and is completely random. The only exception to this is a mass start event, in which everyone starts at the same time. Certain events have athletes competing against a clock, while relays and sprints are head-to-head competitions. When slower skaters are overtaken by faster skiers, the faster of the two must yell “track”, in order to make the slower athlete yield their position.

Who Are The Favorites For The 2022 Beijing Winter Olympic Games?

While it is still a little too early to determine individual Olympic betting odds for the the 2022 Beijing games, there are several favored countries. Norway remains the most favored to medal in this event, based on their past winter Olympic records. Sweden and Finland round out the medal predictions, as historically they have also done very well in this event. To remain as up-to-date as possible on the Olympic cross-country skiing betting odds, make sure you check sportsbooks like Bovada - the best online books for your winter Olympics betting needs.

Americans are legally able to place wagers on any Olympic sport they’d like to wager on, so long as they use an online sportsbook to do it. While online betting is the preferred method, around three dozen states have also regulated sports betting in their districts. While some federal and state betting laws may prevent Olympics odds from appearing in your local sportsbook, utilize the online Olympic betting site in order to bet on cross country skiing events. 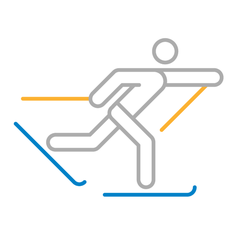