The Olympic shooting betting odds for Tokyo 2021 have a large field of 360 shooters aiming for gold across 15 events. In the 2016 Rio Olympics, the field was even larger at 390. Male and female athletes will be evenly distributed across events, as well. Shooting, historically, has been a popular and longstanding Olympic sport, existing since the modern Olympics were formed in 1896 and only missing the 1904 Olympics (St. Louis) and the 1928 Olympics (Amsterdam). The popularity of Olympic shooting persists despite widespread firearms bans and general inaccessibility of the pastime across most of the developed world.

Given America’s gun culture, those betting on Olympic shooting might think that their countrymen and women perform well at the Olympics. And that instinct is the correct one, within reason. To date, America has owned Olympic shooting like no other nation. The US has 110 medals, effectively doubling up on Sweden and China, which have 57 and 56 total medals, respectively. If you combine their efforts, the Soviet Union and Russia have 80 medals in Olympic shooting, but Russia has fared worse than its collective counterpart since the dissolution of the USSR, earning 31 total medals. The US has 54 golds, 29 silvers, and 27 bronze medals to date. All that said, over the last few Olympics, the US has lost a bit of its edge, ceding tremendous ground to various European and Asian nations like Italy, China, and South Korea. The shooting events for the 2021 Tokyo Summer Olympics will be held at the Asaka Shooting Range.

The shooting events that take place at the Summer Olympics are not as popular as some of the other sports, however, money can certainly be made betting on these odds. Right now, Bovada has different futures odds posted for different men’s and women’s shooting events including the men’s 10m air pistol and skeet and the women’s 10m air rifle and air pistol events. Included in the men’s futures odds bettors could not only bet on the winner of the event, but also on who will be in the top-3. With that, not only can new users get great promotions before betting on these events, but existing users can as well with Bovada’s referral bonus where existing bettors could get an extra $125 deposited to their account with any new referral. They also have a great mobile betting platform in which bettors can place bets on the shooting events at any time from anywhere.

PROS:
CONS:
BetOnline.ag
24/7 Support And Easy To Use Lobby

BetOnline is the best sportsbook on the Internet for betting on shooting at the Summer Olympics. The Tokyo Games will be well represented at BetOnline in 2021 , and the site promises to have over 10,000 wagers available to choose from. Given that Olympic shooting alone has 15 events and 360 competitors, there will be several thousand lines to go on in this event by itself! Of course, you’re not going to be shooting in the dark when you sign up at BetOnline to bet on the world’s greatest sport. Instead, you’ll get expertly researched and curated odds, and you’ll be able to browse the odds boards efficiently, find your targets quickly, and pull the trigger with ease!

For new members who join BetOnline to wager on 2021 Olympic shooting events, the site is offering up to $1000 in free play bonus bucks. Just use promo code “BOL1000” when making your first deposit, and BetOnline will match your total by 50%. This promotion carries a reasonable 10X rollover requirement, so it’s advised that you only select this particular perk if you plan to do some high-capacity betting. If you only want to bet on the Olympics here and there at BetOnline, of course, that’s still possible, and it’s still the best site going. When you bet on Olympic shooting at BetOnline, you’re guaranteed to have a blast!

Can US Residents Wager On Olympic Shooting At The 2021 Games?

Absolutely! Every legal Olympic sportsbook in America will accept wagers on Olympic shooting for the 2021 Games. However, if you want to maximize your options and chances to win, you’re going to want to use an online sportsbook like Bovada, BetOnline, or SportsBetting. Because these books are more in-tune to shooting on an international level instead of just in the US, they will have better Olympic betting odds, and lots more of them! For single-shot betting, US books are fine. However, for full mag dumps, an Olympic sports betting site is the way to go. 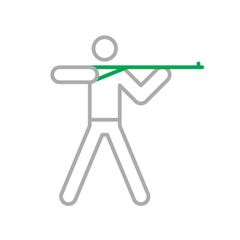 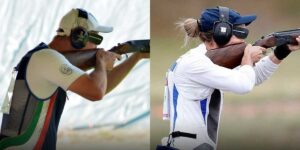 While America used to be a dominant force in the shooting sports, Old Glory is no longer the best way to identify a winning shooter at the top professional and amateur levels of competitive shooting. With South Korea and Indonesia as the shooting betting odds favorites in the Olympics coming in, China, USA, and Hungary are all within striking distance. Each sportsbook will offer different odds for Olympic shooting, so be sure to scan the lines before submitting a bet.

In the Women’s 25m Pistol event, the odds seem fairly wide open, with Kim Min-Jung of Korea leading at +400 odds, and four other women with odds under +1000. Kim Min-Jung may be the favorite, but there are plenty of relevant competitors in the field. Anna Korakaki is the reigning gold medalist in this event, and she actually won two separate Olympic medals in 2016, becoming the first Greek athlete to do so in more than a century. She is also the first woman to be an Olympic torchbearer. Her work is cut out for her in the Women's 25m Pistol odds, however, with Kim Min-Jung and Rahi Sarnobat as serious competitors to handle.

The Men’s 25m Rapid Fire Pistol event has a fairly open field, although Lin Junmin of China stands at the top. A medalist at the 2018 ISSF World Shooting Championships, Junmin is a notable favorite to win the gold medal, although there are other competitors that could be potential challenges to him. Christian Reitz of Germany is the current world record holder in this category, and will be a legitimate threat to win the gold medal. Reitz has been competing in the Olympics since 2008, when he won the bronze medal in this event in his first Olympics. Can he add Olympic gold to his trophy case?

In the 50m Rifle event, it could be anyone who comes out on top. Five different competitors have odds under +1000, and only one of them has odds under +500. Sergey Kamenskiy, a 2016 Olympian making his return to the event for the Russian Olympic Committee, is that man. His competition comes from Hungary, Croatia and China. Notably, there are two Chinese shooters, Zhao Zhonghao and Zhang Changhong, in the top five of this event, meaning that China has a pretty good shot at coming away from this one with a medal. Notable among the top five is Petar Gorsa of Croatia, who has competed in this event since 2008, and has never won an Olympic medal.

What Are The Rules For Olympic Shooting?

There are a host of rules for Olympic shooting, and each individual event has a completely different setup. The only way the rules are similar is that events are always timed in some respect, and the scoring is determined by shot placement on the targets used. You can research the rules of whichever of the shooting events interest you most, but there isn’t a whole lot of strategy required. With shooting, the aim is for the competitor to score as many points as possible. That, of course, is done by maximizing high-value target hits. Beng!

What Are The 2021 Tokyo Olympic Shooting Events?

There are a total of 15 events currently slated for inclusion in the 2021 Tokyo Olympics. That said, there are conflicting reports as to whether or not mixed events will be included this year or if three men-only events have replaced them. This page will be updated when the final determination is made. For now, these are the following Olympic shooting events listed on the official Olympics website:

* These events are reported to be replacing the mixed team events present at former Olympic Games. The mixed events include 10m Air Pistol, 10m Air Rifle, and Trap. If these mixed events remain absent from the 2021 Olympics, you should expect the above marked men’s events to replace the mixed events on the official Olympic shooting schedule at the bottom of this page.

How To Bet On Shooting Events In The 2021 Summer Olympics

There’s really nothing special to know when betting on shooting at the 2021 Summer Olympics. Shooting is a fairly sedate competitive activity, with shooters receiving plenty of time to place their shots. And that means that you’ll have plenty of time to place your bets. While some books may offer a large array of bet types on shooting at the Olympics, most bookmakers are going to treat each event as a futures betting platform. That is, when you select an event – whether it’s a qualifier, quarterfinal, semifinal, or medal shoot – you’ll basically get a list of competitors, and you’ll simply be tasked with picking the person you think will win. In the Olympics, you’ll get plenty of straight bets and plenty of straight shooting!