If you’re looking for archery Olympic betting odds for the 2021 Olympic games in Tokyo, Japan, you’re in the right place. Archery is one of the oldest sports at the Olympic games – not in terms of tenure at the Games, but in terms of how ancient the actual practice is in the history of humanity. Indeed, the use of the bow and arrow for hunting, recreation, and war predate recorded human history. In Japan specifically, the first recorded presence of archers – that is, those who practiced the martial art of kyudo – dates back to at least 500 BCE, though the discipline really took off in the 12th century. Archery made its modern Olympics debut in 1900, but was dropped after 1920 and only reintroduced in 1972. Since then, it has been a regular Olympic discipline.

In 2016 at the Rio Games, Japan fielded four archers but failed to place. Instead, neighboring South Korea swept the events, winning gold in all four of them. The US podiumed twice, winning one silver and one bronze medal. No other country had more than a single medal for Olympic archery. If you’re expecting more of the same in Japan, of course, you’re probably right. On the individual side, South Korea has owned Olympic archery since the 2012 Games. However, on the team side, the country has won the gold medal five times in eight tries (1988, 2000, 2004, 2008, 2016). There is no reason to expect US or European challengers to buck the trend. That said, the Italian team won archery gold in 2012, and the American team took the prize in 1996.

What Are The Rules For Archery In The 2021 Tokyo Olympics?

The rules for archery in the 2021 Games depends on the discipline. There will be 128 archers competing, with each participating nation being allowed to compete with a maximum of three male and three female athletes. The events scheduled include the men’s individual, the women’s individual, the men’s team, the women’s team, and the mixed team. The mixed team event is new for the 2020 games, and as in the other team events, the South Koreans are heavy favorites.

Despite the selection of events, each will be limited to the traditional recurve discipline as held under World Archery terms. This means that archers will be shooting at targets at a distance of 70 meters (230 feet). Events are played in a single-elimination format. Each archer will have a time limit, and the targets are comprised of ten concentric circles. A bullseye gives the most points, with the point value dropping for each subsequent circle around the bullseye. A ranking round system will be used for determining the seeding for the head-to-head archery matchups.

Bovada is the leading offshore sportsbook serving US customers, and it’s been in business for better than a decade. In fact, its management team has been around even longer, and Bovada’s first iteration was one of the Internet’s very first betting sites. The site offers more Olympic betting odds than any of its competitors, too, with literally thousands of lines available during the course of the Games. Mix in Bovada’s mobile in-game betting options, and you’ll get thousands more ways to wager, too. Whether you’re betting on archery or any other Olympic discipline, if you wager at Bovada, you’re guaranteed a first-class experience across the betting board.

Bovada accepts most US players aged 18 or older. That said, you’ll want to make sure your state of residence hasn’t formally mandated a minimum age to bet on sports. If it has, you need to go with your state’s legal age limit (usually 21). Currently, Bovada does not accept sports bettors from Delaware, Maryland, New Jersey, or Nevada. However, those states each have domestic sportsbooks up and running, making it something of a moot point. If you live anywhere else in the US and want to wager on archery at the 2021 Summer Olympics in Tokyo, signing up with Bovada is fast, free, and easy. You can even get a $250 Sports Welcome Bonus that matches your first deposit by 50%, giving you an edge as sharp as an arrowhead!

Please note that currently, Bovada does not accept new members from the states of Delaware, Maryland, New Jersey, or Nevada.

There are currently archery betting lines posted for the 2021 Summer Olympics. There’s no doubt that defending champion South Korea is the runaway favorite, and while they aren’t likely to win all the archery golds in the 2020 Tokyo Olympics, they have a better shot than anyone else. The South Korean archery team is borderline unstoppable but American Brady Ellison could ruin their Olympic archery plans.

Brady Ellison is favored to win the gold medal in Men’s Archery, although the Korean trio of Kim Woo Jin, Je Deok Kim and Jin Hyek Oh are all serious threats to Ellison’s dominance. Ellison is the reigning bronze medalist in this category, and will be looking to upgrade to gold against the trio of elite Korean talent. Je Deok Kim already won one gold medal, partnered with An San in the mixed event, and is looking to add another, although he’s edged out among the Koreans by Kim Woo Jin.

An San stands at the top of the Women’s Archery odds, with Kang Chae Young alongside her. An San won the gold medal in the mixed event, partnered with Je Deok Kim, while the two odds leaders teamed up with Jang Min-Hee to win the Women’s Archery team event. Now, it’s a question as to which of the two top archers in the world will take down this gold medal. An San set a new record for Olympic archery in the qualifying rounds, scoring 680 of a possible 720. Kang Chae Young has been so dominant that she is nicknamed “The Destroyer”. Also worth a mention is Deepika Kumari, who has been ranked as the number one archer in the world, and could be the only serious threat to Korean dominance. 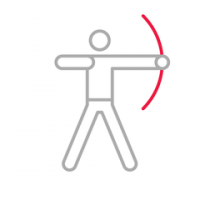 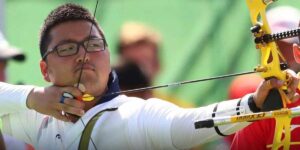 Who Are The Favorites For Archery In The 2021 Tokyo Olympics?

The favorite to win gold in archery at the 2021 Tokyo Olympics is South Korea on the team side. For individual events, the favorites are going to be the World Archery Federation’s top-ranked athletes. These include world number-one, Korean Lee Woo Seok, number-two-ranked Steve Wijler of the Netherlands, and third-ranked Kim Woojin, also of Korea. For the individual side, you can expect these three athletes to dominate the odds boards. Among the top-ranked men, only Brady Ellison has won an Olympic medal, taking bronze in 2016 (Rio). On the women’s side, among the top-ranked archers to win an Olympic medal are Chang Hye Jin (gold, 2016) and Lisa Unruh (silver, 2016).

The following archers currently make up the WAF’s top 10 on the men’s and women’s circuits:

Can American Players Legally Wager On The 2021 Tokyo Archery Events?

Yes! That said, there will likely not be a tremendous amount of odds to be found at the land-based and state-licensed sportsbooks popping up throughout the US. This is because, while such books do support Olympic betting, they simply don’t cater to archery or other events that are dramatically more popular in countries outside of America. Fortunately, you aren’t limited to these local domestic sports betting options. If you use a legal offshore Olympic betting site, you will be able to wager on a slew of archery-related odds and lines. You might even get some live betting access and have some props to pick from! That said, remember that in just about every event, South Korea will be favored pretty heavily. The South Korean dominance of the sport on the global level is no fluke!

How To Place Bets On Archery Events At The 2021 Olympics

There are numerous ways to wager on the 2021 Olympics archery events in Tokyo, but they all amount to the same thing. When you see odds that you like, whether you’re betting in person at a brick-and-mortar book or online with an offshore bookmaker, you’ll simply select your picks and submit your ticket. At a physical book, you’ll be able to do this either at a self-serve touchscreen kiosk or at a ticket counter. Online, you’ll simply visit your book of choice, tap on your selections, input a dollar amount reflecting how much you wish to wager, and then submit your bets. You’ll also be able to place parlays and other wagers, though the rules for doing so will vary with the service or book that you use.